Here’s What the Big Tech Companies Know About You 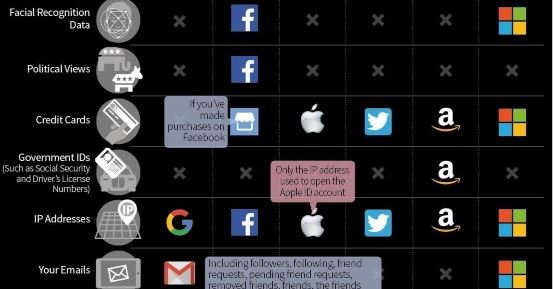 The novelty of the internet platform boom has mostly worn off.

Now that companies like Facebook, Amazon, and Alphabet are among the world’s most valued companies, people are starting to hold them more accountable for the impact of their actions on the real world.

From the Cambridge Analytica scandal to the transparency of Apple’s supply chain, it’s clear that big tech companies are under higher scrutiny. Unsurprisingly, much of this concern stems around one key currency that tech companies leverage for their own profitability: personal data.

Today’s infographic comes to us from Security Baron, and it compares and contrasts the data that big tech companies admit to collecting in their privacy policies.

While the list of data collected by big tech is extensive in both length and breadth, it does take two to tango.

For many of these categories, users have to willingly supply their data in order for it to be collected. For example, you don’t have to fill out your relationship status on Facebook, but millions of users choose to do so.

DID I OPT INTO THIS?

The majority of the data categories on the list make sense – it’s a no-brainer that Amazon has your credit card information, or that Google knows what websites you visit. Even the least tech-savvy person would likely understand this.

However, there are definitely some categories of data that get collected and stored that may sound unnerving to some people:

Remember, this is just what companies admit to collecting in their privacy policies – what else do you think they know?